EC MEDIUM with MUG
EC Medium, otherwise known as EC Broth, is a liquid medium used to detect the presence of coliform bacteria in drinking water, wastewater, and foods. Developed by Hajna and Perryl, it was designed to detect coliform bacteria, specifically E. coli. A buffered Lactose broth, it contains Bile Salts to inhibit Gram-positive bacteria and spore-forming microorganisms while enhancing that of E. coli. Coliforms can be detected by growth at 37°C, while Escherichia coli are detected by growth at 44.5°C. Dipotassium Phosphate and Monopotassium Phosphate act as buffering agents while Sodium Chloride maintains the osmotic balance of the medium. The addition of 4-methylumbelliferyl-β-D-glucuronide (MUG) allows for the rapid detection of E. coli. MUG is used as a substrate to detect glucuronidase activity, since its degradation by this enzyme produces the fluorescent compound 4-methylumbelliferone, visible under UV light. 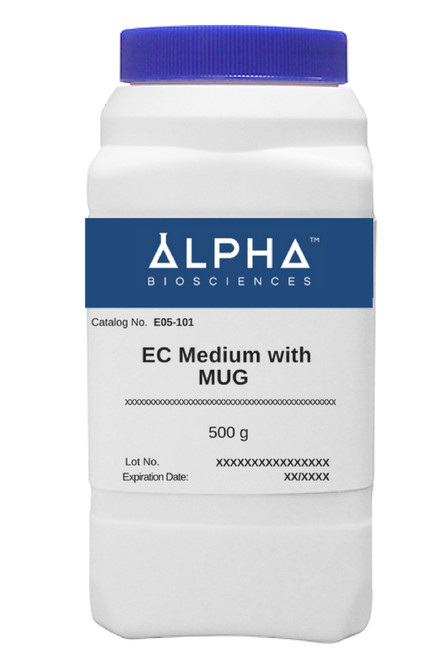